So last Friday, I was lucky enough to be invited to Krispy Kreme’s VIP launch event. I was part of the first group that was able to check out the first New Zealand store, try out their drinks, doughnuts and get a behind the scenes sneak peak. The store opens to the public this morning at 8am so if you want to know what to expect, continue down below.

New Zealand is pretty late at getting brands and companies maybe because of how far we are from everything. However, as the saying goes, it’s better late than never! Well our wait is over because Krispy Kreme is finally here in our shores. The first store at 3 Ronwood Avenue, Manukau is open to the public and I think it will definitely be a smashing hit.

When I arrived at the store, I was surprised at it’s size. For a place that mainly sells doughnuts, the store is massive and there are a lot of seats.

Just like other fast food outlets, there is a counter where all the delicious-looking doughnuts are displayed. They also have a few selection of bagels for those who are after a more savoury treat.

Towards the left when you go through the doors is a big glass window where you can see the kitchen. Everything is open so you can see the production line of doughnuts being cooked and glazed. 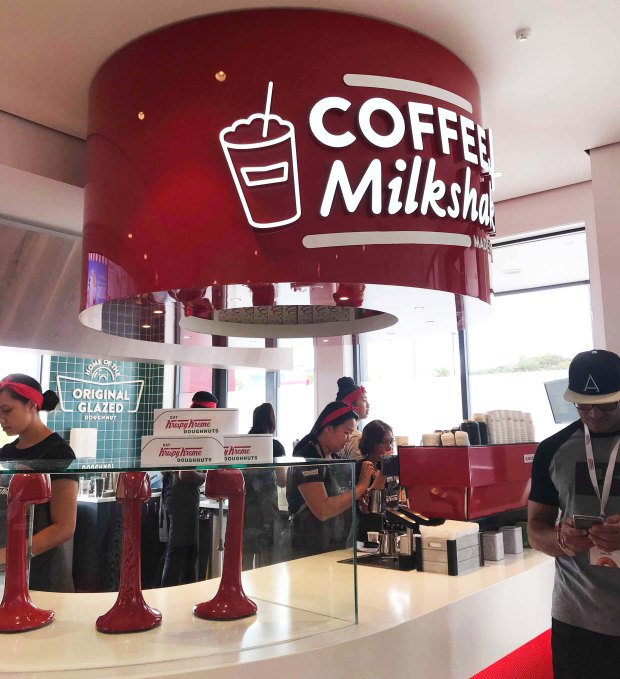 Towards the right of the counter is a drinks station. Krispy Kreme offers a variety of drinks such as milkshakes, kremeshakes and coffee. I highly recommend the Original Glazed Kreme shake as it tastes exactly like the doughnut. 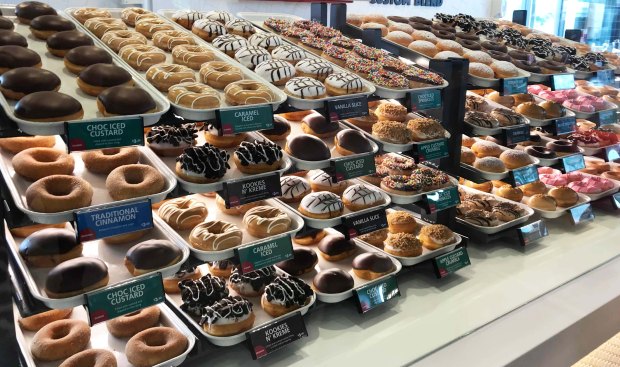 If you’re wondering about the flavours, there are 13 in total with the Original Glazed being the most popular. The doughnuts are so pretty and they are actually all hand decorated by staff. So those Kookies N; Kreme doughnuts are all done by the awesome people in the kitchen and I must say, it was the one I was eyeing at the most. 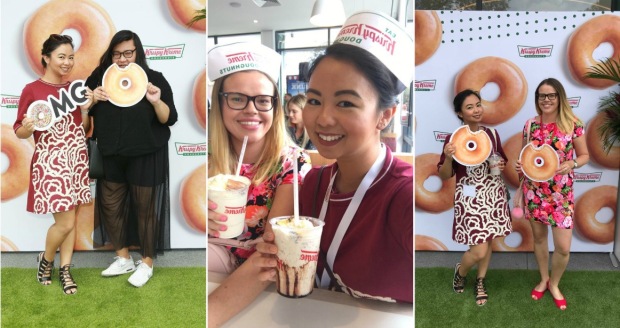 I really enjoyed this event. It was so much fun and I’m glad I got to enjoy it with my fellow bloggers Jess and Georgie. I was on a sugar high and I loved that we got to participate in three activities. 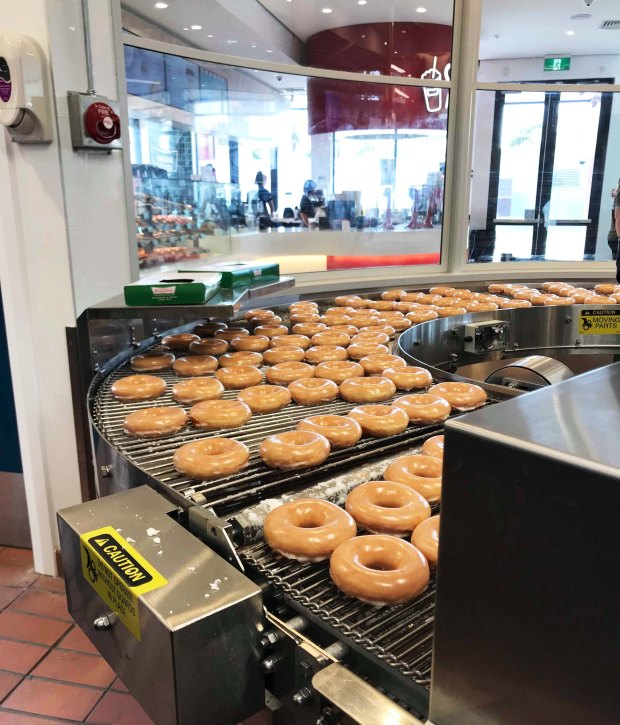 The first thing my group did was to tour the kitchen/production line. They explained how the doughnuts are made and different stages. The best part of this was being given an Original Glazed doughnut fresh from the conveyor belt. It was warm and so fresh. It was the best doughnut my lips have ever touched and sadly, I probably won’t get that chance again. 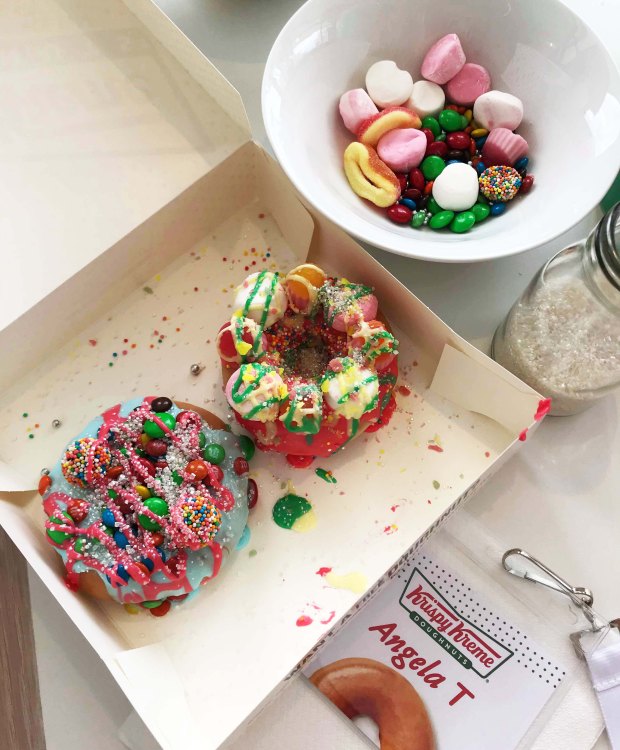 Lastly, we got to decorate our own doughnuts using all the lollies that they set up for us. 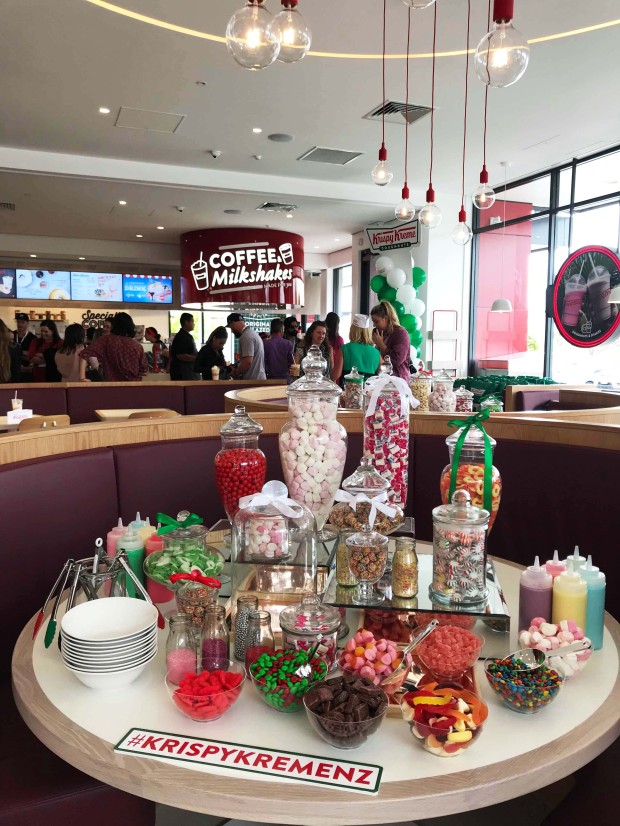 We were spoilt for choice and I just ended up dumping all the lollies and chocolate onto my doughnuts. It was great fun.

I also learnt a few things about Krispy Kreme which I found interesting:

I’ll end this post with a photo of Georgie (from Georgieats) and I clearly beaming with excitement. It was such a great event and I hope everyone enjoys Krispy Kreme as much as did.

As mentioned at the start, the store at 3 Ronwood Avenue, Manukau is open today, 28 February. You can grab doughnuts inside the store or in the convenience of your car as they also have a drive-through.