I didn’t do a recap last month so I thought I’d combine April and May in one. The past two months have been a bit hectic and stressful for various reasons. Whilst I’m glad last month is over, I can’t believe we’re halfway through 2017 already. It’s been 6 months since my life changed and although there were a few bumps along the way, I’m pretty happy.

I won’t do this post in chronological order but I’ll try separating the two months so I can look back on these specific memories too.

The start of April was when I replaced the black furniture in my house that I realised I loathed. You may have seen this old home decor post where I had them but the furniture in my old office/closet room were all white. I wanted to match everything and I finally did it.

The best part for me was getting a small dining table. I had no idea how much it would’ve made me happy. We used to eat in the small built-in table in the kitchen or in the lounge but now I have a dedicated space for eating and it was perfect. The dining table and tv unit were both from Trademe for less than $100. The ladder shelf I already had and I got it from Kmart.

April was exciting because I was invited to the Huawei P10 launch. I took my sister and we had a great time. I also won an amazing prize at the end of the night…

I won a Huawei smartwatch and the box is signed by Jimmy Choo. It was amazing and I feel so lucky. I’ve been wearing the watch ever since I got it. I don’t want to ramble on about the watch as I might do a post about it. I’m not a techie but it might be interesting if you’re thinking of getting one.

This isn’t really a highlight but in April, little Mouse had the snip. He was a bit groggy when he got home from the vet but he bounced back straight away and he’s cuter than ever. Seriously, how is Mouse so adorable?!

I also went to a bridal party in April and there was this amazing table of food from Platter and Graze. Not only was it beautiful but the food was great too. It was a winner.

Towards the end of April, I watched my first ever comedy show with Lena from Lena Talks Beauty. We watched Daniel Sloss first and he was absolutely hilarious but also thought-provoking. His show makes you think about relationships and you don’t expect that from a comedy show. It was great. The second one we watched in May was Joel Creasey and he was also hilarious in a completely different way. I loved both shows and I can’t wait for next year’s NZ Comedy Festival. Hopefully I get to watch more shows because now I’m hooked.

Mother’s Day was in May so to celebrate that, we went to Matakana. We explored the markets and ate brunch. It was a great day. My mum, sister and I got rose gold rings from the markets.

The next day I went to a wedding which was a semi reunion of old high school/college friends. My Three Floor dress was opshopped a while back and I’m glad I finally got to wear it.

I also got a haircut last month. I’m back to having short hair and I really like it.

We also surprised our friend on his birthday and we had a great dinner at Sweat Shop Brew Kitchen. I finally got to wear my thigh high boots. 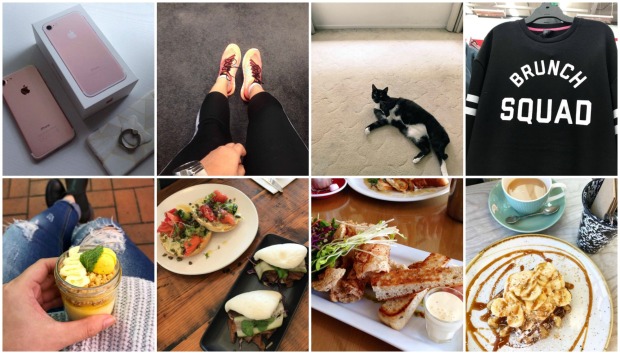 The other things that happened in the last month were:

Although it was been quite a stressful month, writing this post has made me realise that life isn’t so bad after all. The good outweighs the bad times. I hope you like reading posts like this because I enjoy doing it. It makes me go back to wonderful memories instead of dwelling over the not-so-good ones. I hope I have better/more highlights to share next month.

Happy long weekend if you’re in NZ too.

3 thoughts on “April – May Highlights”