In my first post this year, I briefly mentioned my new kitten Mouse. Then I realised I dedicated an entire blog post to Turbo when we got him so I think it’s only fair that I properly introduce Mouse to all of you and to let you know of his background and how I suddenly got a second cat.

My first cat Turbo was from the SPCA. Mouse on the other hand, has a more interesting story.

From what I know, Mouse was found on the side of the road all by himself. No mother or siblings. He was then taken to a vet clinic but the place doesn’t usually have cats to be adopted because it’s not a rescue. As you can see in the photos above, Mouse looked quite rough and he was begging to be brought home. He was healthy enough to be adopted but his fur was coarse, he was really skinny and his paws were dirty.

His name was actually not Mouse either but ‘Christian Grey’. I shudder at that but it’s not really that surprising from the person who named him. That name definitely did not suit him at all.

Anyway, my partner at the time brought him home as an ‘early birthday present’ to me. The photo on the left is him at the vet with those incredibly sad eyes. On the right is his first night at my house after his bath. Those eyes don’t lie. He didn’t want to be in that cage anymore and he found his new home when I got him. His eyes were brighter and he was even smiling. Who could resist such a cute face, right? 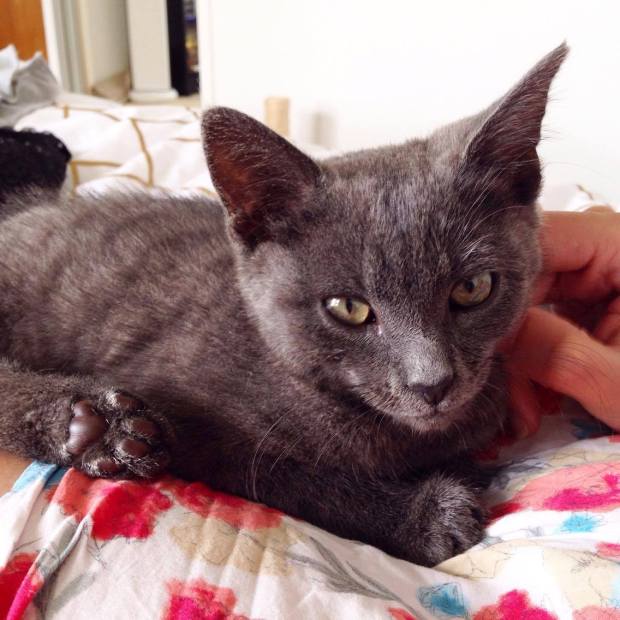 A few days later, my partner and I broke up which I’ve sort of touched on in this post. I thought of giving Mouse back which would’ve been a huge regret if I did but what most people didn’t know is that the vet clinic Mouse was from is the workplace of the woman my partner was cheating on me with.

So yes, I didn’t specifically plan having a second cat but in a twisted turn of fate, I now have a lovely grey kitten.

Mouse didn’t have a great start in life and he also came into mine in such strange and overwhelming circumstance that I wasn’t sure at the start if I would be able to live by myself and take care of two cats. However, what happened between my ex and I was not his fault and I knew he deserves a good home.

The main thing I was worried about was if I could handle everything but thankfully I did. I worked out that I’m in the position to be able to afford staying where I live, paying all the bills by myself and having two cats to take care off.

When I realised that Turbo and Mouse got along really well in the first few days, I also knew I couldn’t give Mouse back. Turbo has been the ‘only child’ but I’ve wanted a second cat so he has someone to play with and not be bored. Turbo did hiss at him the first night but eventually he welcomed Mouse.

What I’ve learnt is that you have to take it slow with the introduction. I separated both of them first and let them interact through the door. I placed their food bowls by the door and eventually left a gap so they can see each other while they were eating. Eventually, Turbo warmed up to his new brother. I had amazing help from my sister who has a special bond with Mouse. He loves her dearly. 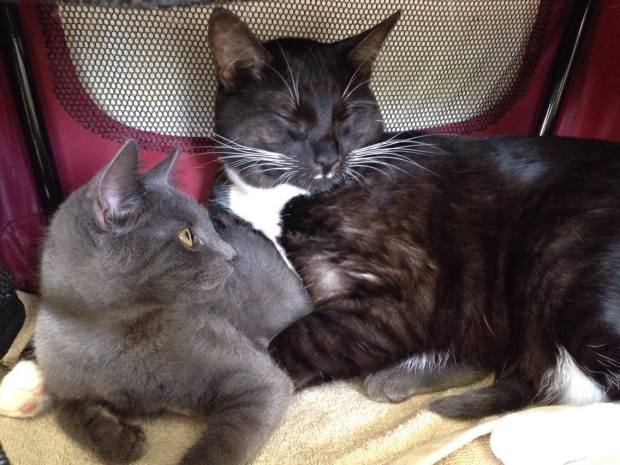 As Mouse was found alone, he didn’t know how to clean himself. Turbo is a really clean cat and he taught Mouse how to lick himself which was adorable. Sometimes it was a bit aggressive and I was worried but I realised Turbo was trying to pin Mouse down so that he can clean him because Mouse wasn’t doing a great job.

Now, they run around and chase each other which is great for Turbo. Turbo has become a fatty and having Mouse chasing him is a good exercise for him. He’s more active now and with regulated food, Turbo has lost some weight too.

If you’re introducing a new kitten with another cat, I wish I knew at the start that play fighting is normal and that I shouldn’t worry too much. They’re establishing hierarchy. Turbo has been the man of the house for a year and suddenly there’s this small creature following him and copying everything he does so I can imagine it would be threatening. Someone new is in his territory and boundaries need to be established. 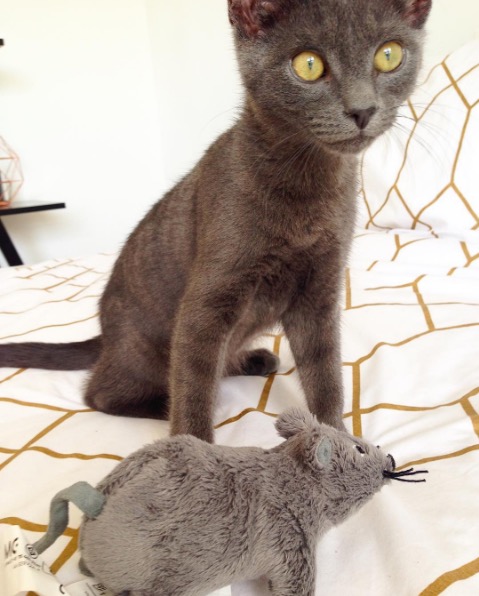 On a side note, his name Mouse is actually from my friend who jokingly said he looks like this stuffed Mouse I got for Turbo from IKEA when I went to Sydney. I was struggling with a name and Mouse was perfect. He’s grey, tiny and even squeals like a mouse. It suited him well  and it was better than his first name off a horrible book/movie.

We also thought Turbo had a loud purr but boy, we were wrong! Mouse’s purr is so much louder that I can hear him even when he’s in the other room. 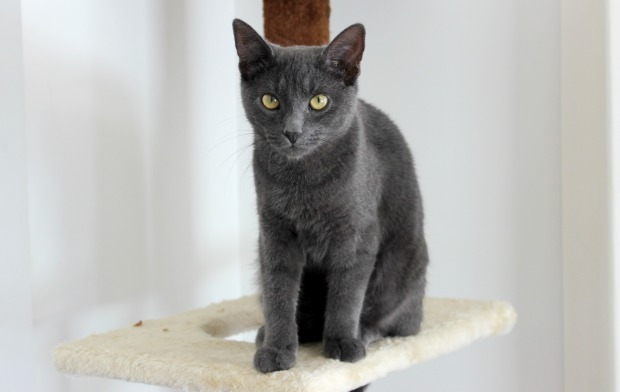 Mouse may be small but he is a character. I’ve had him for almost 4 months and he is absolutely adorable. He loves everyone and is cuddlier than Turbo because Turbo has never really been a lap cat. He sleeps beside me and sometimes on me for naps. He definitely knows when I need a pick me up because he’s extra cuddly when I have my down days.

Mouse has these amazing bright eyes and he looks like he’s smiling most of the time. He’s such a smiley cat and I love that about him. 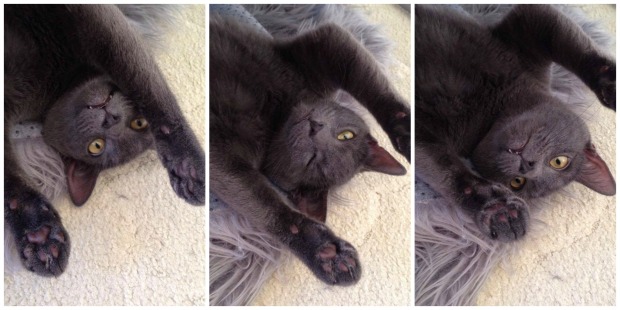 He’s also very derpy. He has so many faces and we can watch him for a long time and be entertained.

I also don’t know if he’s actually a cat or half bat. Haha

Now I know that keeping Mouse was one of the best decisions I’ve made.  I come home and both Turbo and Mouse are waiting for me. They make my day better and give me so much love.

This is the face I am welcomed with when I wake up and when I get home. I don’t think a day goes by when I don’t say ‘cute’ when I look at him. 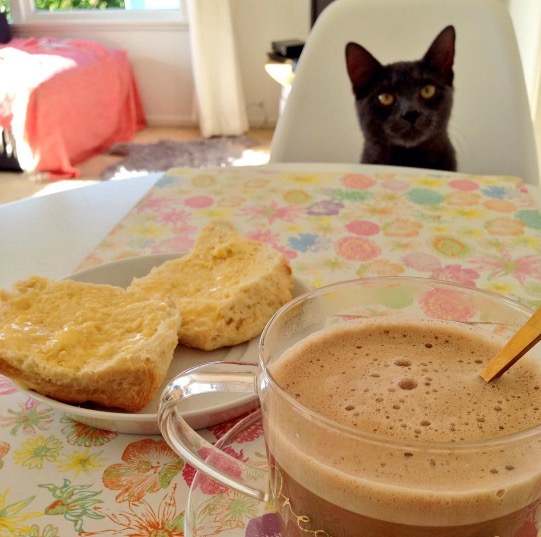 Mouse would also eat everything but one look at his cute face and you really won’t be able to resist or be able to get angry at him. With that face, he can get away with anything.

Before I decided to keep Mouse, I also asked a few people if two cats are better than one and the answer was a resounding yes. I’m so glad I listened to this because Turbo now has a sibling that he plays, fights and sometimes cuddles with.

The main thing I worry about now is if I’m giving them the same treatment/love. They do get jealous when I’m petting the other but I love them both in different ways. Making sure they don’t steal each other’s food is also one. Turbo wants the kitten food and Mouse wants Turbo’s food. It’s a never ending cycle of me shouting “stop eating his food Mouse/Turbo!!”.

So although having a second cat was not planned at all from my end, I couldn’t ask for a better trade. I lost a person that wasn’t worthy of my time and love and gained an adorable fluffy kitten that needed it. Turbo, Mouse and I are one big happy family and my life is better with them.

I have so much love for these two and they have been the best companion the past few months. I now truly understand that pets are so much better than people. Turbo and Mouse are not pets, they’re family and I believe things happen for a reason.

I went through a crappy time in my life but now I have two cute cats and I wouldn’t have it any other way. I got the better end of the stick and for that I feel incredibly lucky. I gained Mouse when I needed it and he’s been the best addition to my life.

I know this post is photo-heavy but quite personal/sappy at times but I hope you enjoyed it anyway. I share my life here on my blog and a big part of it is my two cats. I know I’ve turned into a crazy cat lady but I embrace it. Haha

If you want to see more adorable photos of Mouse, please check out their Instagram: TurboandMouse.

If you’ve always wanted a cat/s, I highly recommend you get one if you can afford the vet bills, food and you have time to care for them. I also recommend looking at rescue places such as SPCA, Lonely Miaow  or 9 Lives Orphanage if you’re in Auckland. There are so many animals that are waiting to be adopted.

You won’t regret it and you never know, your cat may change your life. I can honestly say both of mine have.

12 thoughts on “Mouse the grey kitty”